...the Obliteration of your Icon of Truth...

In Greek mythology, Erebos represents the deep darkness conceived as a primordial deity, the personification of darkness—one that was born of chaos. Ouroboros is an ancient symbol depicting a serpent eating its own tail, often interpreted as an emblem for eternal cyclic renewal, death, and rebirth. 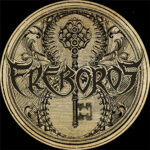